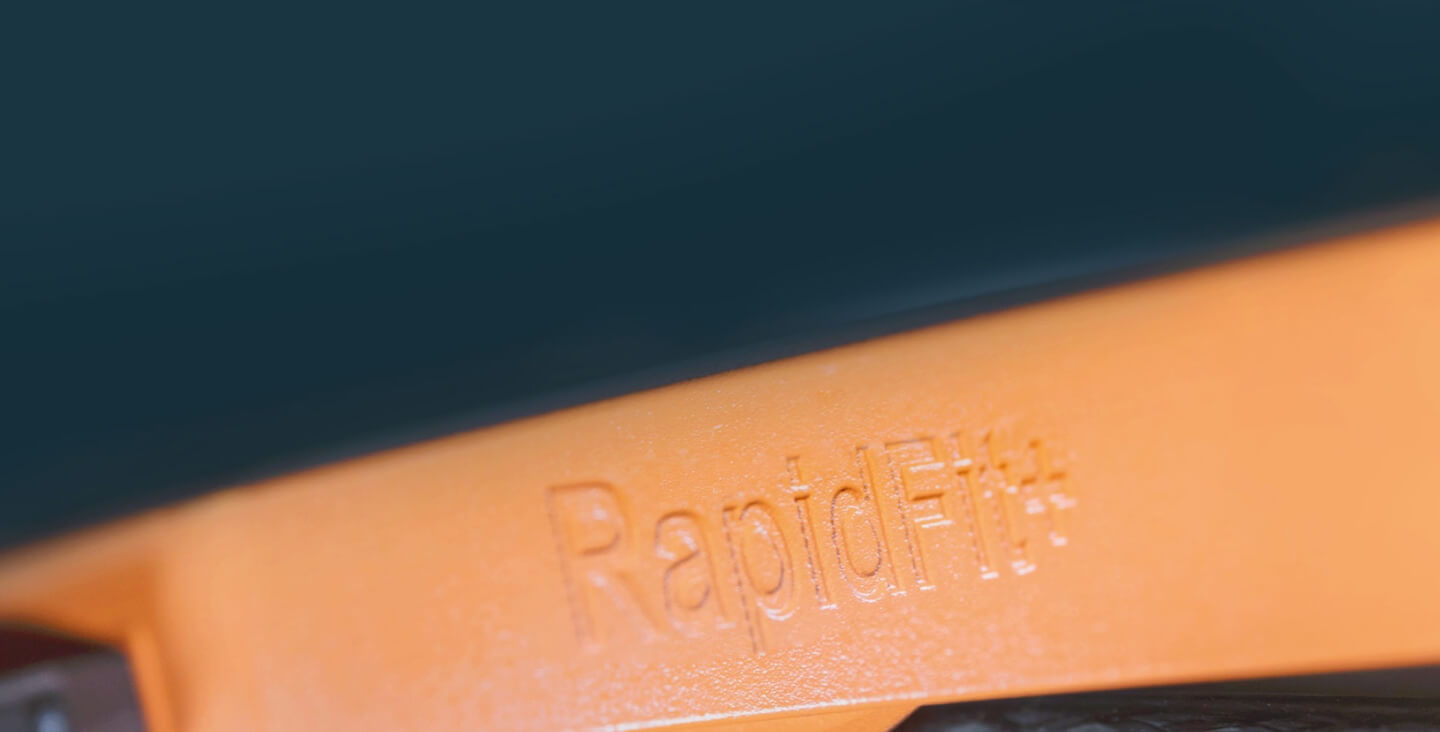 Modern car production lines are fast, complex and extremely well-choreographed. They rely heavily on technology and automation, but also on countless tools and fixtures that are made specifically for the line or even for individual car models.

These one-off bespoke components are rarely in the spotlight when it comes to production line innovation. Volvo Car Gent and Materialise have changed this.

Together we’ve discovered that if you boost performance and streamline supply of tools and fixtures, you can unlock savings, production headroom and more. How? By using a combination of 3D-printed and off-the-shelf parts to create tailored solutions faster. The first case: a gluing jig that helps workers affix various combinations of Volvo logo, model number and other information to the trunk of each new car.

The new gluing jig combines all previous components in one fixture, weighs 64% less and can be delivered in only two weeks at nearly half the price of the previous jig.

Almost half of Volvo’s annual car production (533,000 in total in 2016) runs off the assembly line at Volvo Car Gent in Ghent, Belgium. The location looks after the XC60, S60 and V40, as well as their respective Cross Country models, producing around 57 cars per hour for customers around the world. It’s a fast-paced, tough environment, with little room for error.

A small but crucial step in the assembly of any Volvo is the “branding” of each car with logo, model number and other marks. These vary from car to car, but have to be affixed accurately and consistently, speedily and without damaging the paintwork on the trunk. Previously, this was done using a number of separate, cumbersome gluing jigs – templates that workers hoisted onto the back of the car to then place the right marks in the right place, with the correct alignment.

Hannes Wauters, Equipment Engineer at Volvo Car Gent, is always looking out for opportunities to improve these types of production aids and fixtures. Working together with Materialise, he and his team identified the gluing jigs as a perfect case for 3D-printed production line equipment.

Hannes explains: “With production aids we often need a quick fix to keep the line going, so a lot of the time we fall back on traditional manufacturing methods for those – because it’s what we’re familiar with. We don’t often get the time to experiment, but when there’s a chance to learn new things, we go for it. The new gluing jig was for models going in production in January 2017, so we had a bit more time to develop it. We already had a couple of 3D printed parts on the old jigs, so it was a great opportunity to try and see the benefit of additive manufacturing methods when designing a part from scratch.”

Out With The Old: Bulky, Damage-Prone, Difficult to Fix

The previous jigs were of welded construction and quite heavy. The fixture was difficult to calibrate and had tolerances of up to +/- 2mm. The jigs broke easily when accidentally dropped and had long lead times of at least 6 weeks. The requirements for the new fixture were accurate alignment, repeatability and that it would leave no marks on the paintwork. In addition, the part had to be both sturdy and lightweight.

Hannes continues: “The most important feature for us was durability. A fixture like the gluing jig has to withstand a pretty rough and tumble industrial environment.”Going Modular: The

Mathieu Cornelis, Account Manager at Materialise, explains the process Materialise went through to come up with the new design: “When we first assessed the gluing jig for 3D print potential, we instantly thought that, while it was a fairly bulky fixture, it didn’t necessarily have to be a single 3D-printed part. So we started looking into lightweight, warp-resistant and less temperature-sensitive materials that are available as standard stock - to quickly achieve the frame size without adding weight. We could then use additive manufacturing for the finer details of the jig.”

The Design & Engineering team at Materialise chose standard carbon tubing to serve as a basic, very light frame, and then designed 3D-printed connection points, pads and buffers to join them up. The modular approach meant that a range of technologies and materials could be used to exploit their specific properties. For example, the buffers were printed using TPU (Thermoplastic Polyurethane) for its rubberlike and highly durable characteristics. This would ensure the fixture would easily survive a fall.

The connection points were printed in PA-12 (a polyamide), which is particularly suited to complex, interlocking parts. Specifically designed glue channels, only achievable with 3D Printing, between these connection points and the carbon tubes ensure a mechanical fit as well as an adhesive bond between the parts.

A special calibration fixture replaced the previous, error-prone process of calibrating the jig on a separate car trunk, the dimensions of which can vary depending on ambient temperatures. Due to this ease of calibrating and a much more accurate construction of the fixture itself, the new gluing jig achieves tolerances of under 0.2mm.

The overall result is a fixture that costs 48% less, is 64% lighter and can be assembled very quickly. It makes the most of the properties of individual components, as well as combining the gluing templates for all possible combinations into a single jig. Its modular nature makes is easy to adjust, calibrate and repair.

“Most importantly, though, the whole project was a huge learning opportunity for us. It has really taught us to ‘think additive’ and added a new string to our bow that’ll allow us to continuously improve our line. Finally, it might seem a minor point, but the new fixture looks incredibly cool and modern. If I show people round the line, the gluing jig is where I stop because the jig looks so good. It may be a small thing, but it makes me proud of my work.”

“The precision of the new fixture really surprised me. We can now achieve much tighter tolerances and expect reduced scrap/redo rates. Our workers on the line love it. The new jig is easier to handle and much lighter. They don’t have to worry about breaking it and the ergonomics are hugely improved. The guys don’t want the old fixture back! - Hannes concludes

Want to know more about our solutions?

Get in touch to learn more about how RapidFit can improve the safety, efficiency, and cost-effectiveness of your workplace.

Curious to know whether laser checking fixtures would be profitable for you? Tell us a bit about your business and simulate your potential gains in production efficiency, operational savings and profits. Think about the part for which you want to run this simulation, and drag the slider to set the variables.

Success Story
Understanding the Value of RapidFit: An Interview with Bart Wilberts

Comau wanted to broaden their line with the addition of quality checking solutions. By collaborating with the RapidFit team on these fixtures, they can retain their core advantages thanks to faster lead times, lighter tools, and modular systems that ultimately improve quality checking for their end customers.

Using a combination of 3D-printed parts and a fully modular approach, RapidFit’s smart cubing system empowers automotive brands to speed up their engineering and development process. Whether that’s for an Aston Martin DB11 or the iconic London taxicab. Discover the future of vehicle development, as seen through the eyes of RapidFit head Filip Dehing.

January 31, 2018
whitepaper
How Automotive Jigs and Fixtures Can Maximize the Benefits of 3D Printing

3D printing (3DP) is increasingly seen as the best way to produce automotive jigs and fixtures. But even though many auto manufacturers have already taken the 3DP route, far too many of them are still missing out on benefits like lighter weight, higher accuracy, lower costs and shorter lead times.

RapidFit, a tool manufacturer and subsidiary of the 3D printing specialist Materialise, is launching a new innovation in its tried-and-tested modular system for automotive tooling. The innovative combination of carbon fiber beams and individual 3D-printed elements makes it possible to produce jigs and inspection fixtures that are up to 90 percent lighter than conventionally produced tools.